It's summer here right now in Australia which means lots of BBQ's and lots of salads.  I've found a new one which I originally got from the Faking It cookbook by the ABC.  In the cook book it's featured as a side for a cajun spiced fish - and it's fantastic that way, but I've been using it as a salad when we have BBQ's of meat or fish as a primary side along with some asparagus or capsicum. 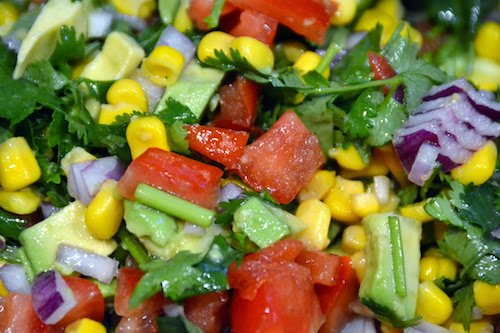 Without giving the whole recipe away it's pretty easy to make - tomatoes, avocado, corn, coriander and red onion forming the main ingredients.  The sauce is a little surprising, but again super simple.  I'm thinking I might add some black beans and chilli to this and turn it into a meal on it's own next.  Do you think that will work?
#adventuresincooking recipe