January 22, 2014
I have a friend that tells me I holiday a lot.  I wish this were the case, but usually when I'm on a plane flying somewhere it's for work.  This time, though I'm on a trip that is just a holiday & only a holiday.  This is much cause for celebration!

Holidays are interesting in our family.  I'm not a big holiday planner.  My mode of operation is usually to book a flight and maybe the first night or two of accommodation and then just go and see where my trip takes me.  My husband is the exact opposite.  I remember one trip we made with friends that he had a pre-departure dinner a week before to brief everyone of the itinerary, what to pack and the schedule for each day.  Thankfully he's mellowed somewhat in the scheduling and I've grown to love and appreciate his planning.  It means I just turn up and enjoy the ride!  This time we've headed to Spain.  And given I've got internet where we are staying I thought I might try and blog about each day.

We arrived in Spain in the late afternoon.  Just in time for the tail end of the siesta.  After settling in to our great apartment we went walking on a quest for a snack.  Not just any snack - chocolate con churros.  We went to San Ginés just near Puerta del Sol.  (Seeing sights and eating churros - win!)  San Ginés was founded in 1894 and has been making churros and chocolate ever since.  The place was packed and absolutely everyone was there for just one thing - chocolate con churros.  Let me tell you about the chocolate.  It was think, it was dark, it was sweet - but not too sweet, and it was heavenly.  Liquid heaven - or something like that.  I mean check it out - doesn't it look divine?

We walked around a bit more but as our heads were in a complete jet lagged fog (after 2 days of travel to get to Spain), we had an early but unremarkable dinner and went back to the apartment to crash.

Day 2 dawned cold, but sunny.  (When I say cold I mean really really cold.  Well at least for this Queensland girl.  I had about 4 layers on by the time we headed out and looked like the Michelin man in my puffy jacket).  After a brief breakfast stop (more hot chocolate for me - it's a thing here), we headed back through Plaza Mayor. 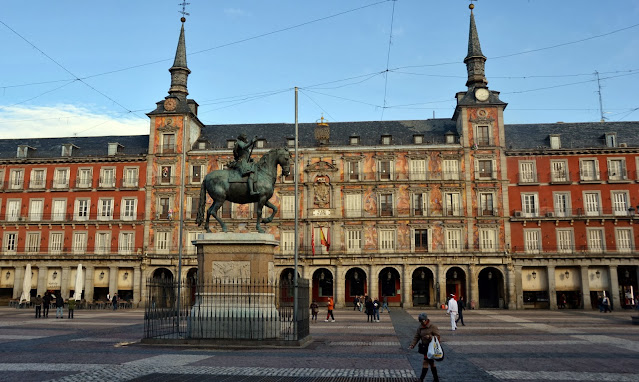 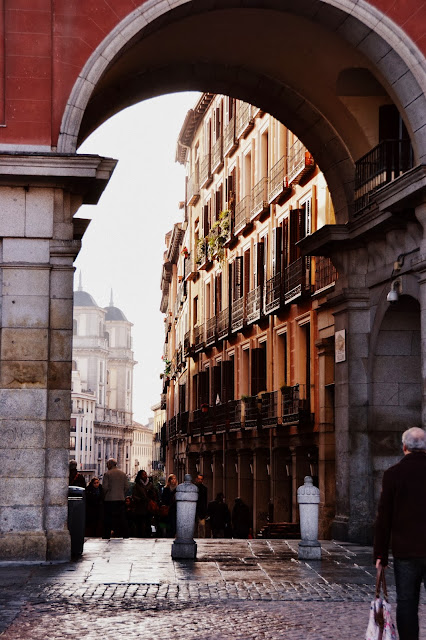 Plaza Mayor is a beautiful square.  It's origins are old (1576 but restored after fire in 1790).  Apparently in days past it was used for markets, bullfights, sports, executions, and during the Spanish Inquisition.  Today it's much more sedate.  In addition to the tourist information centre theres lots of restaurants and shops and some interesting (?) street performers wandering around.  Side note - I've never seen such a fat spiderman and I'm not at all sure about what he was up to.

After leaving the Plaza we wandered the streets making out way towards Catedral de la Almundena and the Palacio Real.  Construction on the Caterdral de la Almundena started in 1879 but only finished in 1993 which makes this a very young church in by Europes standards.  Also a very slow build by anyone's standards.  That said it's very grand from the outside. 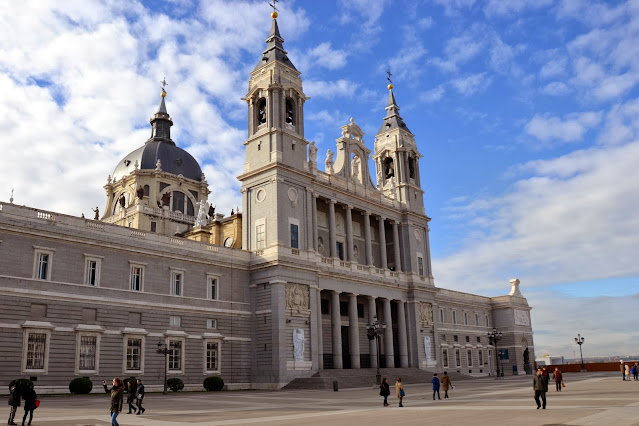 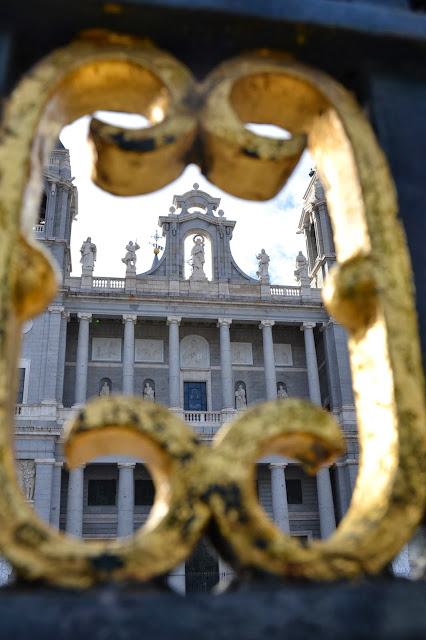 The Palacio Real was built on the site of previous fortresses and castles and was constructed between 1738 - 1755.  It's big.  Really really big.  According to wikipedia it's 135,000 square meters, and has 3418 rooms.   Sadly you can't take photos inside the Palace so I had to make do with taking lots outside.  And one illicit one on the stairs on the way in (ssshhhhh don't tell). 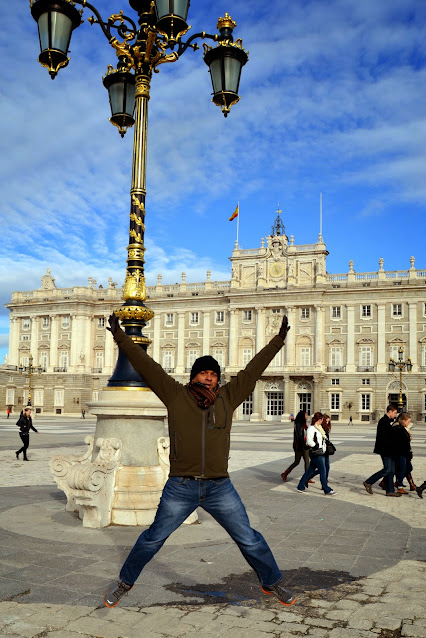 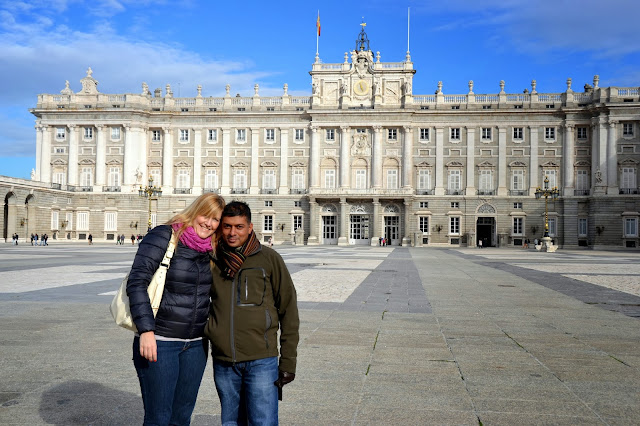 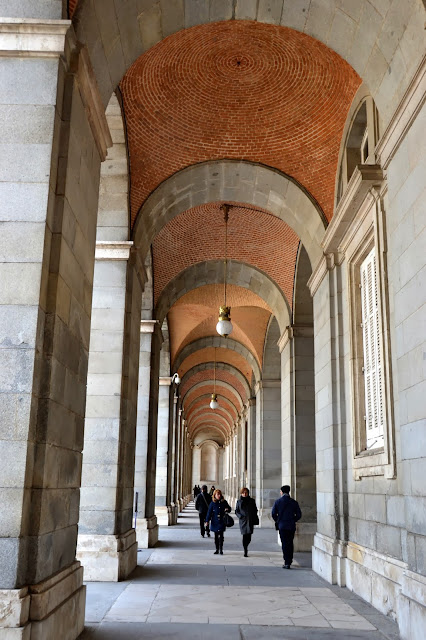 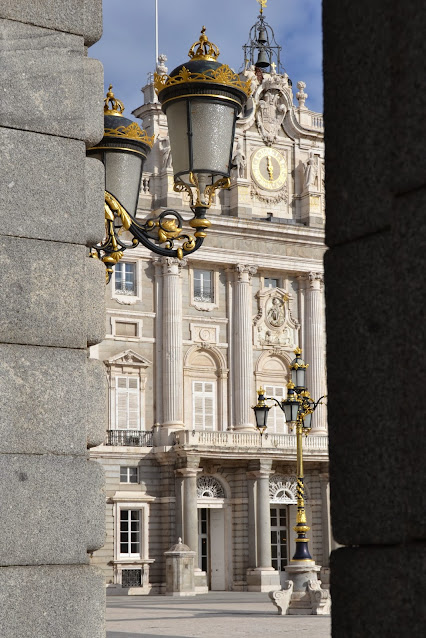 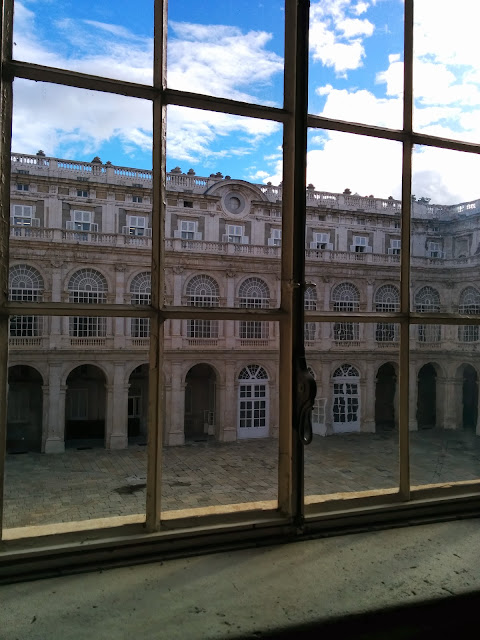 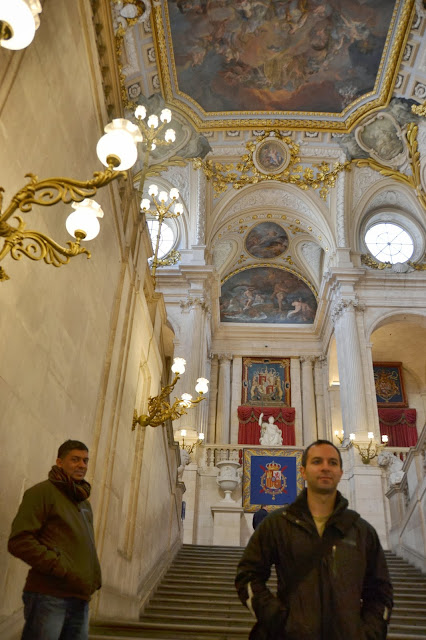 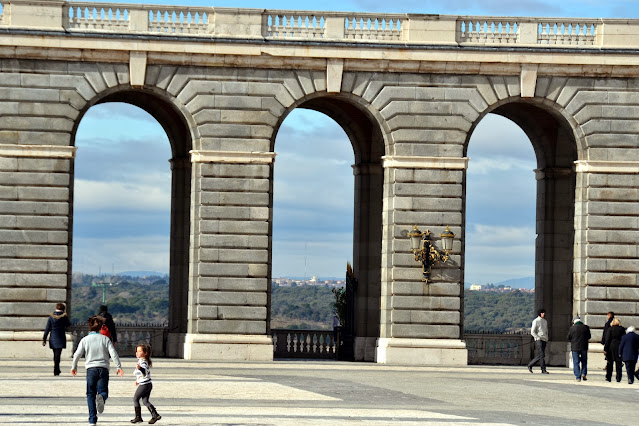 The thing I loved about the Palace was that I saw a few things I've not seen before.  The armoury was immense and had a fantastic collection of armour.  There was room after room of full armour, including armour for horses and children.  Some of it dates from the 15th century and it's been kept in remarkable condition.  The things that stood out to me was how ornate everything way.  The swords, the suits, the horse blankets, the shields.  Everything, and I mean everything was engraved or inlayed with gold or other metals.  The workmanship was nothing I've ever seen before.  The children's armour was also something I'd never seen or even considered before.  Largely ceremonial and used for training, I was amazed at how small several of the suits were, and cannot imagine a child today willingly wearing one.  Just imagine the argument you'd face getting 'junior' dressed in that in the morning!  The other thing that was astounding was the collection of muscats and guns.  The length of some of these guns were amazing.  The longest ones came on their own wheeled support and made it look more like a mini canon that a gun.  I've no idea what the accuracy was, but looking at some of these weapons you would have needed a small army of people to carry them for you.

The other thing at the Palace that I was interested in was the Pharmacia.  When so much of the art and objects in the palace are religious in nature and inspiration it was great to see something scientific in the palace.  That said I'm pretty sure there were some whacky things that happened in the Pharmacy in the early days judging by some of the jars and materials we saw mentioned - but they also showed the doctors who have been part of the Palace since it was built, right up to the later part of the last century.  All in all it was fascinating.

The rest of the afternoon was spent eating tapas and drinking wine at the Mercado de San Miguel, wandering the streets and more hot chocolate.  In the evening we went to the Museo Nacional del Prado and for more wine and tapas.  Here's a few more pics of the day. 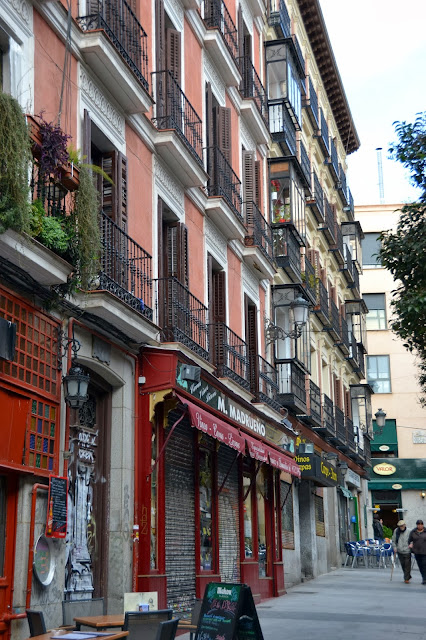 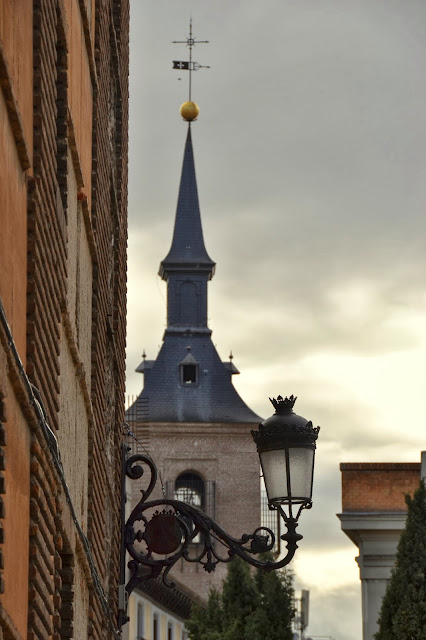 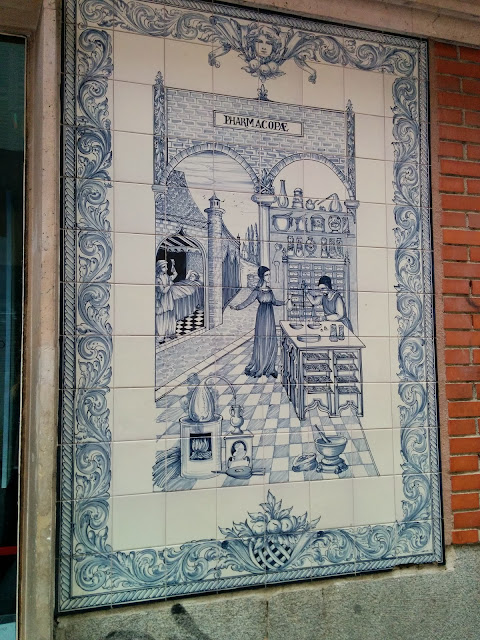 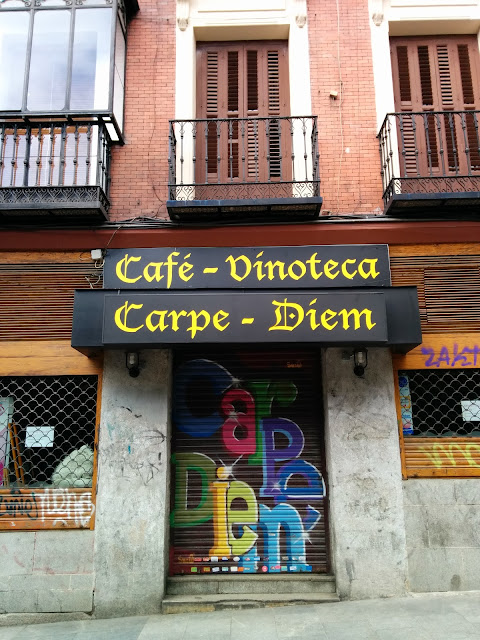 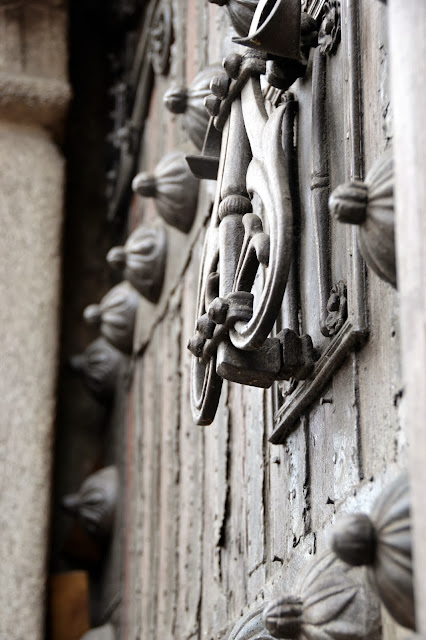 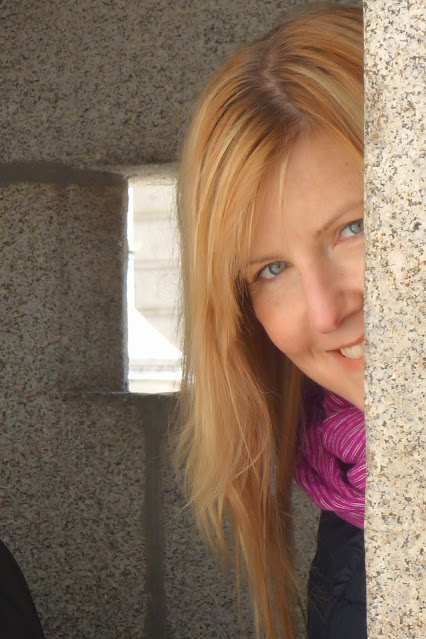 Day 1 into the holiday and I think it's safe to say I'm having a good time.  Looking forward to tomorrow.

Want to read all my posts on Spain?  You can find them here.
Madrid Spain travel