January 11, 2013
TGIF. I don't know about you but it's been a BIG first week back at work for me. Don't get me wrong... I'm excited about what the year has in store, I just didn't expect it to start with quite so much happening. Given the big week I've had I think it's time for a little reward... something with one of my favourite things in it... chocolate. 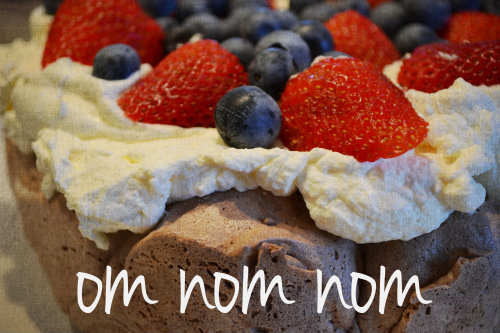 Can you guess what it is?  It's a chocolate pav.  (Pavlova for those who don't speak Aussie short hand). If you don't know what a pav is it's worth reading the wikipedia article even if only to see the line " The nationality of it's creator has been the source of argument between the two nations for many years."  (The two nations being Australia & New Zealand).  Although I can't say I've ever gotten into an argument with anyone over a pav.

The traditional recipe calls for egg whites to been beaten until stiff and firm, before adding in castor sugar, cornflour, white vinegar and vanilla.  I'm not really that traditionally so I went on the hunt for something a little more decadent.  And I found it... on a blog from one of the most indulgent foodies out there - Nigella.  Here it is in all it's decadent glory... the chocolate pav! 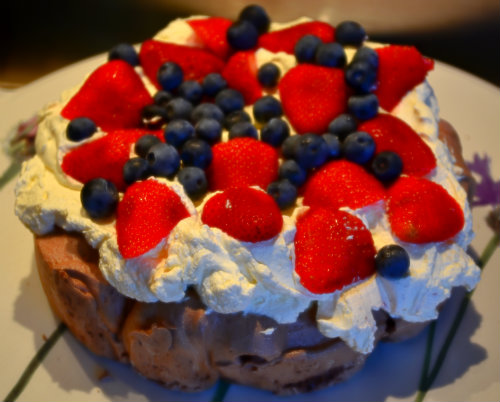 Confession time... it's the first time I've made a pav and I'm surprised by how easy it was.  The recipe on Nigella's blog is easy to follow and has only 5 ingredients (not counting the cream and berries for topping).  I altered the topping to be blueberries and strawberries because I didn't have any rasberries on hand, and it was delicious.  In fact I've served this at 3 parties in the last 2 weeks and it's been a big hit. Simple, decadent & delicious.  Just want you want in a desert.